London – Sleep is for the weak

London – Sleep is for the weak June 24, 2013 Zelas
circusfreakshowfriendsLondonon the roadparteyvacation

What a crazy weekend!!! That was one hell of a trip and it was sooo much fun!The party bitches: Saskia, Scott and myselfDestination: London We took the plane from Frankfurt to London Gatwick at 8:45am on Friday. It was Saskias first flight and she was quite nervous and couldn’t sleep well the night before. We placed her at the window side and she squeezed my hand to mush during the start. But as soon as we were up she relaxed a bit and looked out of the window all the time. Scott ordered some champagne and the stewardess said we all had to drink it and refilled without questioning. So we had to empty the whole bottle and needles to say it was a really fun flight! 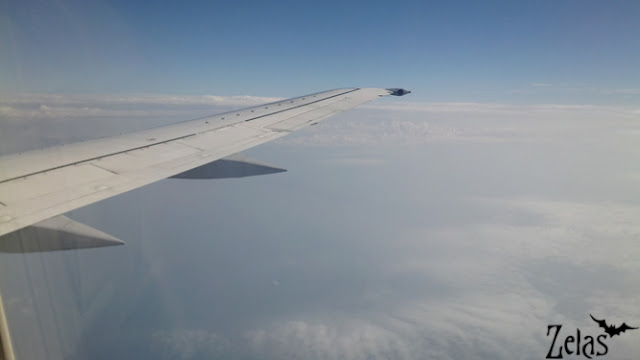 The flight was short and we had a smooth landing at Gatwick airport. After figuring out which train we had to take we drove to Victoria Station and headed straight for a pub! I was really looking forward for a English breakfast (I soooooo love this) and Saskia asked what it contains and was all like “Uuughs” when I told her… but then she ordered one too and guess what? She loved it 😉 She didn’t manage to eat it all up though~ and when the waiter came he pointed at me and said “You did good” and then pointed on her and said “For you no pudding”. 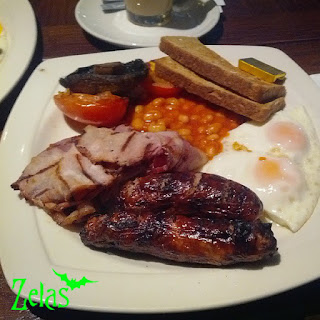 Afterwards we grabbed some Frappés at Victoria Station and went walking to Buckingham Palace. We passed the Royal Mews on our way and I must say I really want to take a tour when I’m back! Whaaaa Horses OMGOMGOMG~ We also went into the Mews gift shop and Saskia bought an ubercute fluffy plush Corgi :3 She called him Baked Beans. After a short stroll we arrived at Buckingham Palace which was closed for a royal garden party~ lot’s of important looking people! Men in pretty fancy uniforms and classy dressed women with fancy hats! Lovely but disappointing at the same time because we couldn’t take fun pics with the guards 🙁 We walked around a bit and a few people wanted to take pictures with us  … they said we were far more interesting than the Buckingham Palace.But it wasn’t only there! People kept taking pics of and with us that day… confusing and interesting at the same time. 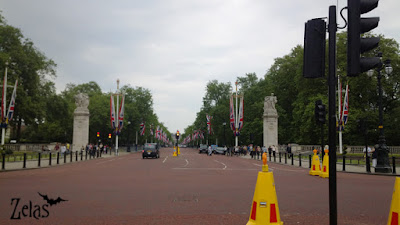 As we returned to Victoria Station I tumbled a bit and ripped my shoe open. Not just a whole, no, almost the entire sole came off! It might have also been a bad idea to wear rocking horse plateaus for two days of backpacking in the first place. But luckily Scott spotted a shoe repair booth and the lovely lady there fixed my shoe in a heartbeat! She pretty much saved my day/weekend! I wanted to take a look if Platform 9 3/4 really exists and so we took the tube to Kingscross Station and headed straight for platforms 9-1 and: there it was! 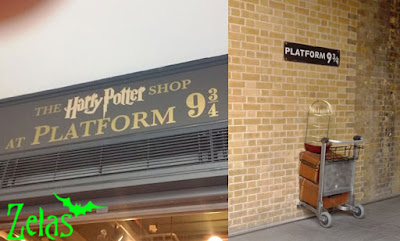 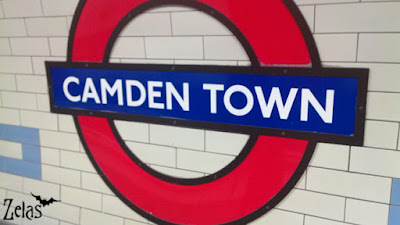 We took the tube to Camden Town after that and~ WOW! I totally love it there!!! Lot’s of crazy lovely people. Tons of awesome shops, pubs, diners, whatever~ lvluvluv! We met a crazy cool guy named Floops who talked us into buying one of his CD’s. Not bad though!We checked out all those lovely little shops and crushed at one pub at the Lock Market for a while. I thought all the time they have a drink called “Troll in the Yar” and found it ridiculous funny (needles to say I was the only one who found this funny…). In the evening we went to Leicester Square for the amazing show with The Folly Mixtures and Rico aka the Zombieboy. Scott picked up his ticket at the theatre (we already got ours) and Saskia and me strolled around a bit and discovered the M&M store. A store with 4… I mean 4 fucking floors stuffed with M&M’s and merchandise. What the hell? The whole store smelled like a giant chocolate drops and it was soooo~ colorful. So we went in and chatted with this charming employee named Chis. We had a lovely talk and he fetched us some color matching M&M’s , Saskia got red ones and I got green ones 😀We said good bye and made our way back to the Leicester Square Theatre and got inside. We got to our seats in the front row and~ yeah. What should I say? The front row was very in front, very close (yass). 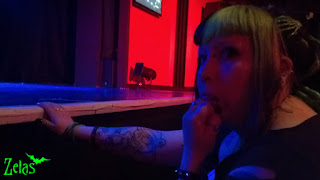 The show started with the lovely and amazing host Miss Laurie Hagen dressed up as Voodoo Queen. She like invaded the stage with a “Good evening bitches!” and we were instantly on fire! Sadly it was not allowed to take pictures but  here’s a link to the official photo gallerie!It was soooooooooo~ awesome!!!The girls were so pretty, sexy and talented! Saskia and me have been screaming and cheering all the time! We had so much fun. And OMGods Zombieboy! He did all the freakshow stuff including the spoon! He played the funny brainless zombie, ate stuff like glass, candles and everything he got between his teeth and lay on a nail-bed while Laurie stood on him! They also made a strawberry shake with some extra earthworms in it. The lovely and pretty Molly Zombie was chosen to get on stage and she got Rico on a leash like a crazy pet zombie! … he humped her leg… and bit into it… and she had to fed him some smelly fish which he spread all over the stage.So after the show the girls came to us and said that we’d been awesome in the front row! Rico stood there by the stage taking pics with people. I was a bit shy at first but I overcame it and went to him. He recognized me from Munich (or at least did a good impression of it) and gave me another high five. We had a nice talk, he was so sweet, and I told him we’d come all the way mostly to see him and he was so lovely. He asked me for a pen and then started to draw hearts and flowers and stuff on my flyer along with an autograph. 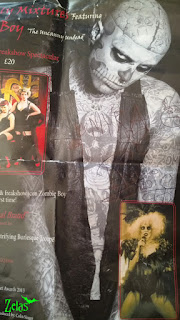 So that evening alone was worth all the sleepless fun we had! Afterwards we went back to Camden Town and went straight for the Electric Ballroom with the intention to party all night. The club itself was a cool location! Really big with lots of stairs, a circular bar and some kind of balcony next to the second floor upstairs. The party people weren’t any different from the ones in our clubs. We didn’t talk to many people they rather stick together but that’s ok.

Sadly there haven’t been much drinks to chose from on the bar. No cocktails and the “long drinks” have been unspectacular and expansive.Also people tend to give me strange looks when I ordered Captain Morgan without coke or a double shot (which still was half a normal shot and triple the price as I’m used to) of liquor~ So if I really had wanted to get drunk… I’d have run out of money way before I actually did and the really worst thing was that the club closed about 3:30 am.As soon as we got outside we got really tired and crept from one closing coffee shop to another until we reached an already opening McDonalds at 5am. Saskia and Scott took a little nap there while I was too awake to sleep and too sleepy to be really awake. 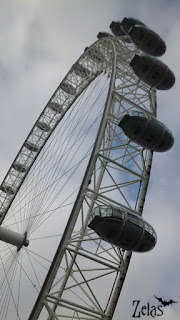 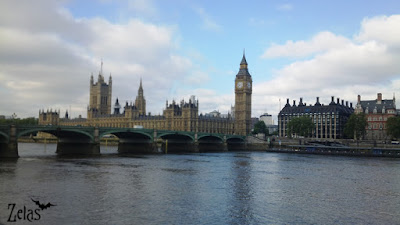 We waited in the McDonalds until the tube started to run again and then took off to see the London Eye. Since we got there so early in the morning there weren’t any tourists and we had a nice view over the Thames 🙂 The London Eye is really impressive when you stand right in front of it. We walked over to the Big Ben and also took a stroll to London Bridge 🙂 Later we returned to Camden Town and had some lovely breakfast at The Diner . For me it was Blueberry Pancakes and a Peanut Butter Shake! Really really tasty but a sugar bomb combo! 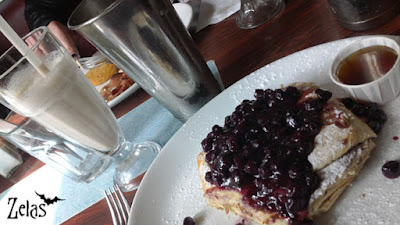 We walked among the markets and made a break at our favourit pub there.
I laughed again at the Troll in the Yar-drink when I discovered after a while that those decorative elements on the plate are not decorative at all… in fact they were letters… The drink was named “Stroll in the Yard“… *cough*I wonder what they’d done if I’d ordered a Troll in the Yar XDDDSo late afternoon we took off to Heathrow. Since the Piccadilly Line was closed several stations (don’t remember why) we had to make a huge detour with different trains and a bus. Was a bit annoying but we made it in time to our flight.Oh hell we were sooo tired. Talking rubbish all the time and being dizzy laughing over everything. We got into the plane and to our seats and Scott said “Sit down…bitches” And Saskia and myself burst into laughter and all the people turned staring at us… 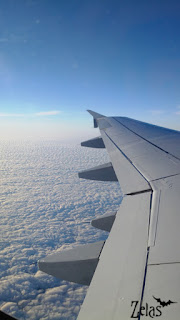 We had a smooth flight home and a packed train. As we arrived at Saskias home I all but collapsed on her sofa and fell asleep in seconds~ didn’t even hear the thunderstorm or the chinchillas making noise all night. I was just dead.So what else can I say? It was one hell of a trip and I wouldn’t have missed it for anything! Can’t wait til we return again! Watch out London~ the Party Bitches will come again! But this time we will hopefully have a place to crash for the night 🙂PS: Trying the thing with the teaspoon is funnier than it seems … XD