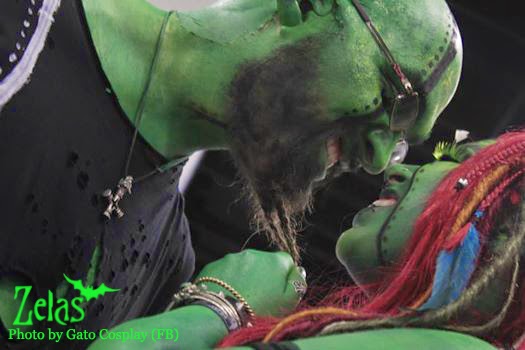 My hun and I decided to visit this years Role Play Convention as some fancy green Woodtrolls.
It was the first RPC for both of us and we were pretty excited (I wanted to visit the RPC for a few years now but oh well…)! MyCostumes got a vending booth there as always and since I have to work in our store on Saturdays my hun and I took the Sunday to visit the RPC.
The lovely Ilka from Kiomi MakeUp (wich we sell in our store) was part of our booth there and was doing professional MakeUp’s live at the booth. So she did the makeUp for my hun and me 🙂 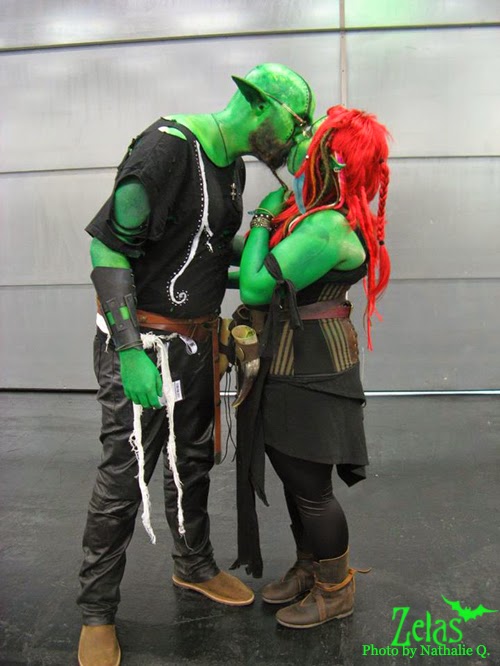 We walked around as walking acts then for myCostumes and Kiomi, met some old and new friends and had lot’s of fun.
The booth of Defcon Unlimited was amazing! They had a small presentation booth to show some of their costumes and a show reel of what they do and also were involved in the big Assassins Tavern that was build there to promote Assassins Creed! They had little stuntshows in the Tavern and a big one at the big stage 😀 I so love their stuntshows! Also had a lovely talk with Lightning Cosplay wich is now part of Defcon Unlimited. She’s such a pretty, talanted, lovely and kind girl! Go like her page and give her some love!
I also loved the camp of the Wasteland Warriors and Megabosh 🙂
Discovered them first at Wacken last year. The camp there was so much cooler and authentic with all the dirt and mud of the festival side but they always are a feast to the eyes and ears! Pretty girls and boys, awesome modded cars and bikes and the crazy songs of Megabosh when they got to play a few songs. Awesome! I heard they will be at Wacken this year too and I’m already really excited. Also got a cool poster at the show at the RPC.
The Role Play Convention provides (as they name already tells us) lot’s of booth’s to roleplaying “games” of any kind. LARPing, Pen&Paper, Tabletop, MMO’s, RPG’s and everything that goes with it. So there were vending booth’s were you could buy dices. Just dices in aaaaaany kind and color you could think of D:
Also clothing, LARP weapons, games, merch, medieval stuff, Nerf guns and so on and so on…
Outside of the fair halls was a lovely medieval marked with booths and stages, many bands played there. Just have a look at the programm and you will understand!