Dust in the Wind – or Wacken 2014 August 5, 2014 Zelas
concertfestivalsfriendsmetalon the roadparteyvikingswacken
We started off to the holy land of metal and mud on Wednesday early morning 4:30am.
My coworker Ellen was the captain of our vehicle and since she didn’t sleep very much we had to take a little break for powernapping. After a long journey -with a little unexpected sightseeing tour- we arrived at Wacken. Our lovely boss and her husband were already there and saved some space for us 🙂 The security was really kind and led us to the destined place.
One of our campneighbors, Fleck, helped us to build up our tent and after everything was set we walked to the festival site to get our wristbands and the Full Metal Bags. 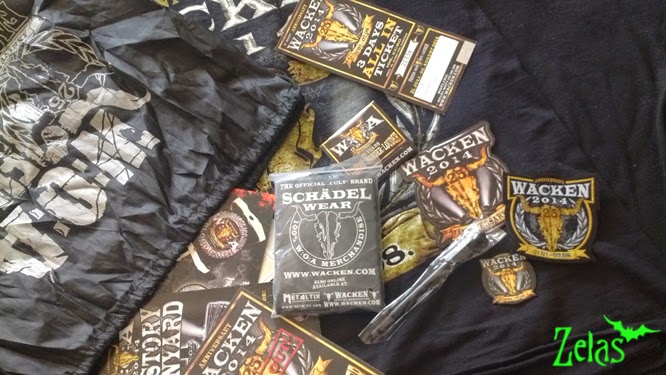 The queue was long and it took us about 15min to get to the counter~ right after we walked to the merch queue to getsome shirts… additional 30mins ^^; 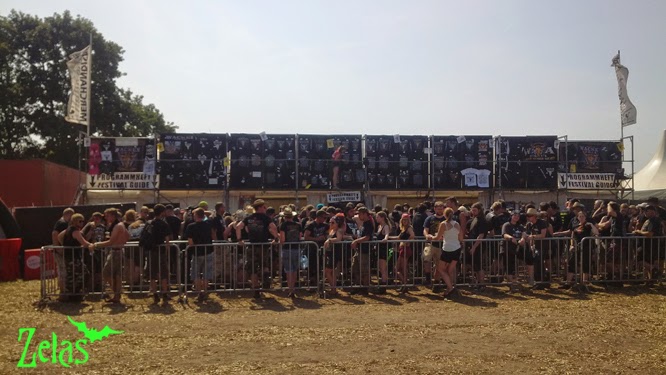 Now it was time to check everything out.
We took a stroll aaaaaaaaall over the festival site. It was so hot and dry and the wind was rather harsh at some points and blew lots of dust and dirt in our faces. We spend the evening with food and drinks at our fav place in the Wackinger Village whilst listening to Dunkelschön (which haven’t been that good … *cough*), Vogelfrey and Faun.

On Thorsday we all took breakfast together and went to the Wackinger Village for Mr Hurley und die Pulveraffen! I bought a shirt and the Grog n Roll CD 🙂 Next came Saor Patrol~ I so love their scottish accents!… even if I didn’t understand everything XD
Afterwards we went to the main stages to see Bülent Ceylan, a German comedian that loves metal and has pretty hair. We had lots of fun 🙂 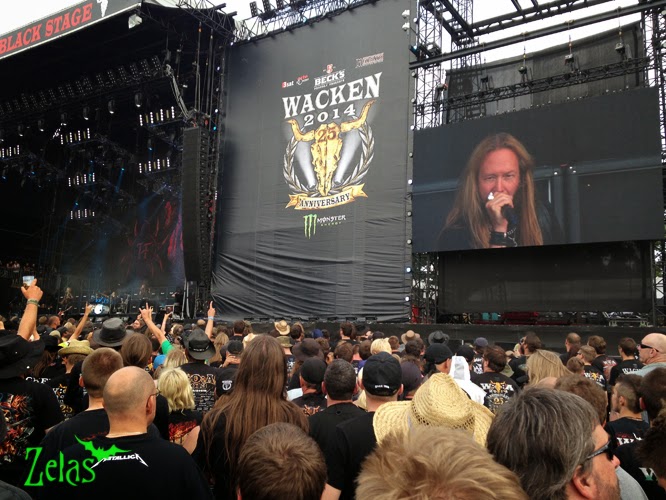 Then we struggled through the masses to get to one of the other main stages for Hammerfall!
Hammerfall was soooo awesome! They played so many of the old songs which made us really happy~ And they were loud! We stod on the right side in the front and the ground was rumbling like there was an earthquake 😛 ♥
When the others went to see Steel Panther my hun and I went back to the camp, had some food and a cozy afternoon. 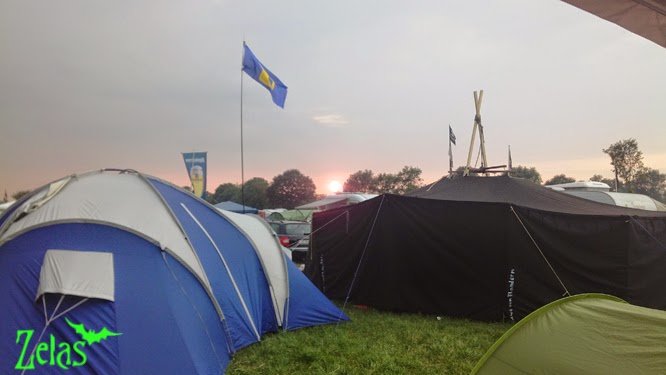 Friday we went down to the main stages early to see Russkaja. I really love those guys~ it’s always a lot of fun! Next we saw Knorkator, also a very funny band from Germany … they are so crazy. After Knorkator was over we want back to our camp and made a BBQ all together 🙂 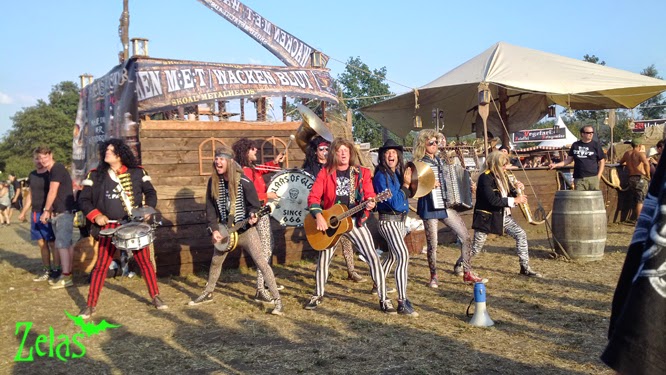 On our way back to the main stages we came across some funny Dutch people: Blaas of Glory
They were so awesome and we had lot’s of fun. They just finished in time for us to go to Apocalyptica (with orchestra). I was really looking forward to that but I have to say that it was quite dissapointing :/ Maybe we were to far away but the sound was crappy and idk… it was not what I was hoping for.

Later in the Wackinger Village Omnia was really great! We also took a little shopping trip on the medieval booths and found some lovely bling 🙂 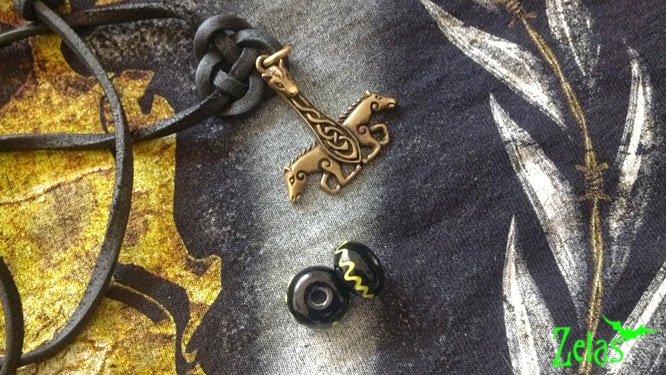 The glass beads are from Hagediesenhain♥

We met my lovely sec.cousin Katha and her friend Julia on the way to Megabosh.
I first saw Megabosh last year at Wacken and liked them right from the start. They are just great! The show this year was a blast again~ with pretty girls and boys and a lot of naked skin and fire (I like fire) ♥ 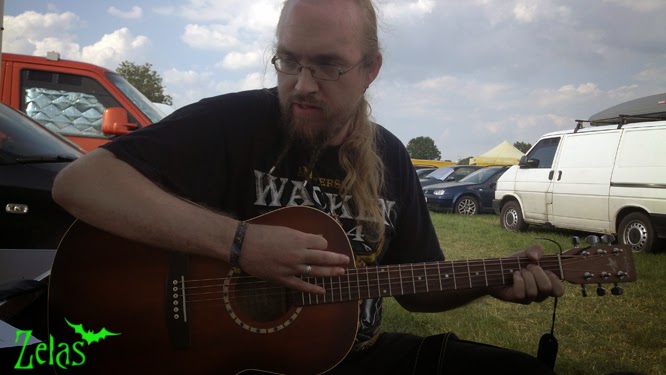 Saturday was the last day of the festival. We slept long, had a shower and had a nice time all together at our camp. With BBQ, games and drinks and my hun playing the guitar 😀
Around 6pm we got down to the main stages for Amon Amarth! ♥
The show was fantastic and sooo crowded! People stood all the way up to the Wackinger Village and even further D: We were at a nice spot in front of the sound tower. It was so great! Johann Hegg was grinning all the time and seemed so happy to see so many people~ it was so much fun to be there. 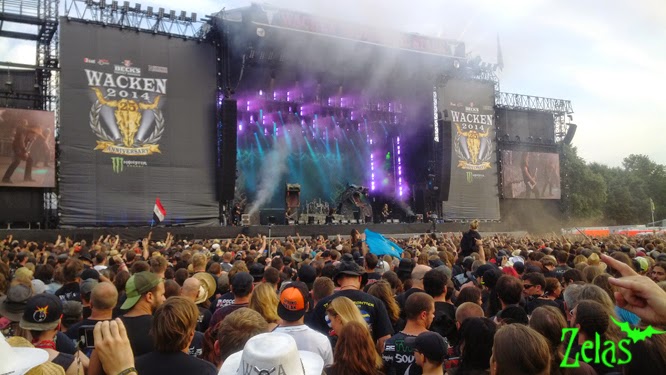 After Amon Amarth we went to see JBO (and again a funny German band which I grew up with) and then as always off to Wackinger Village (yes we like it there!) to see Firkin.

We really were kind of dead that evening and whilst the others went to see Van Canto my hun and I strove back to the camp… Actually we wanted to see Schandmaul, the last gig of Wacken 2014 and a great great GREAT band but we just were so damn tired and since Schandmaul will be near my place soon we decided to skip that and go to our tent.

On Sunday morning we awake to the sound of our camp neighborst destroing their pavilion ^^;
We packed all our stuff, snatched some energy drinks and started the long journey back home…

Thank you!
See you next year Wacken!